On the mobile app, the Schedule tab is your go-to source for your daily game schedule, game scores, tournament and court locations, and more. Additionally, the Starred (prioritized) games feature now allows you to organize your schedule even further.
Topics:
Assigning Yourself to Tournaments
What Populates the Schedule
Starred Games
Game Details
Adding Recruits

Assigning Yourself to Tournaments:

On the schedule tab, you'll see a green book icon in the top-left corner. Selecting the green book will allow you to assign yourself to tournaments by toggling the on/off switch as seen below. 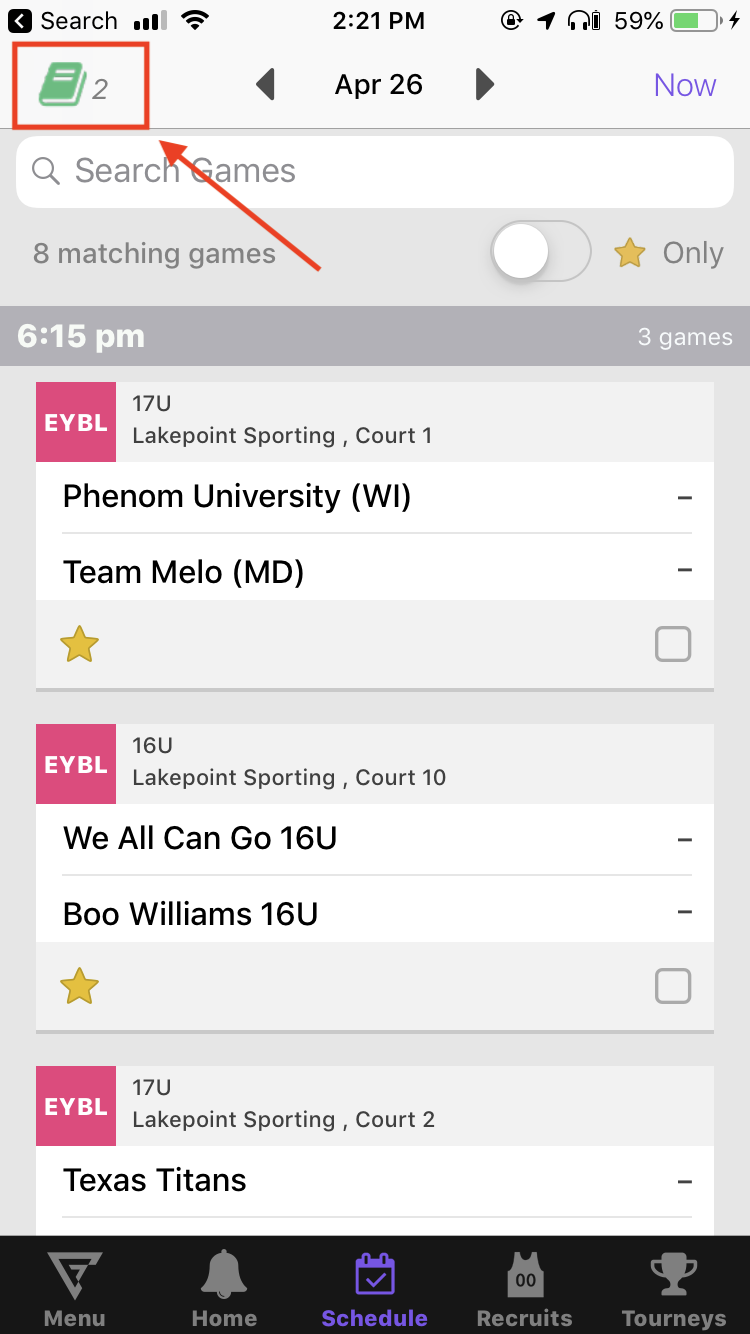 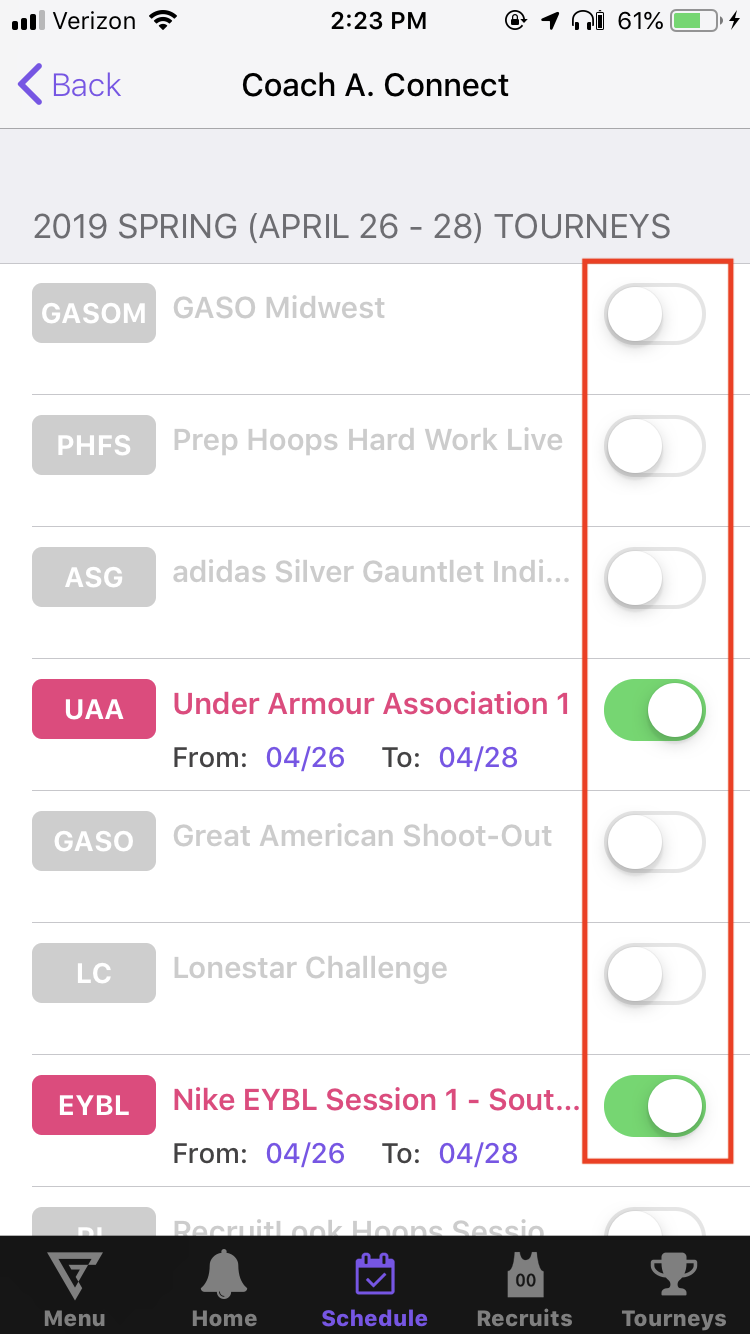 Additionally, you can adjust the dates you will be at each tournament by selecting any date in purple and choosing a new start or end date. Coaches will only see games and receive updates for tournaments they are assigned to, on the days they are assigned. 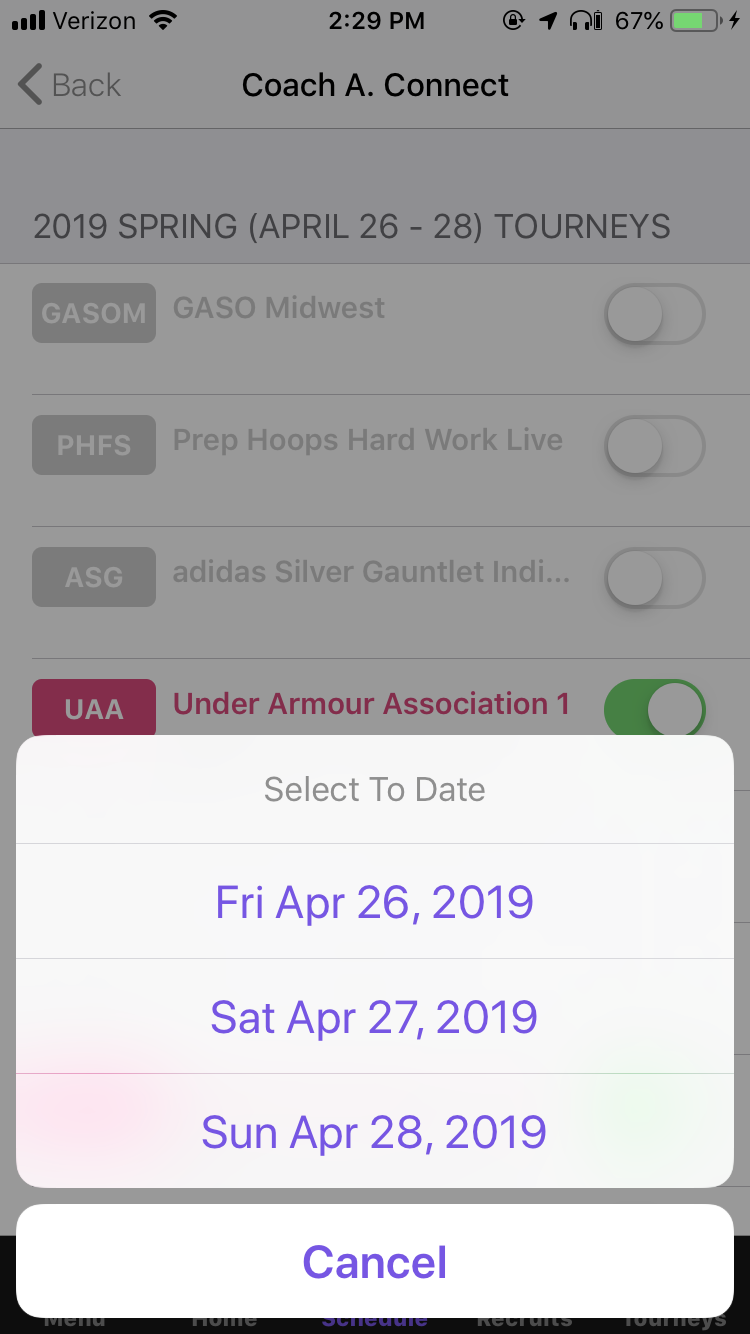 What Populates the Schedule:

Rather than seeing an entire tournament schedule, the Schedule tab will only show games of recruits mapped to a tournament, teams you are following, or games you have starred. This is meant to give coaches more personalized schedules of the games that are important for them to see. Remember games will only populate for tournaments you are assigned to.

1. If you see a green flag next to a team, this means you are following the team. When you follow a tournament team, every game the team plays will be added to your schedule. 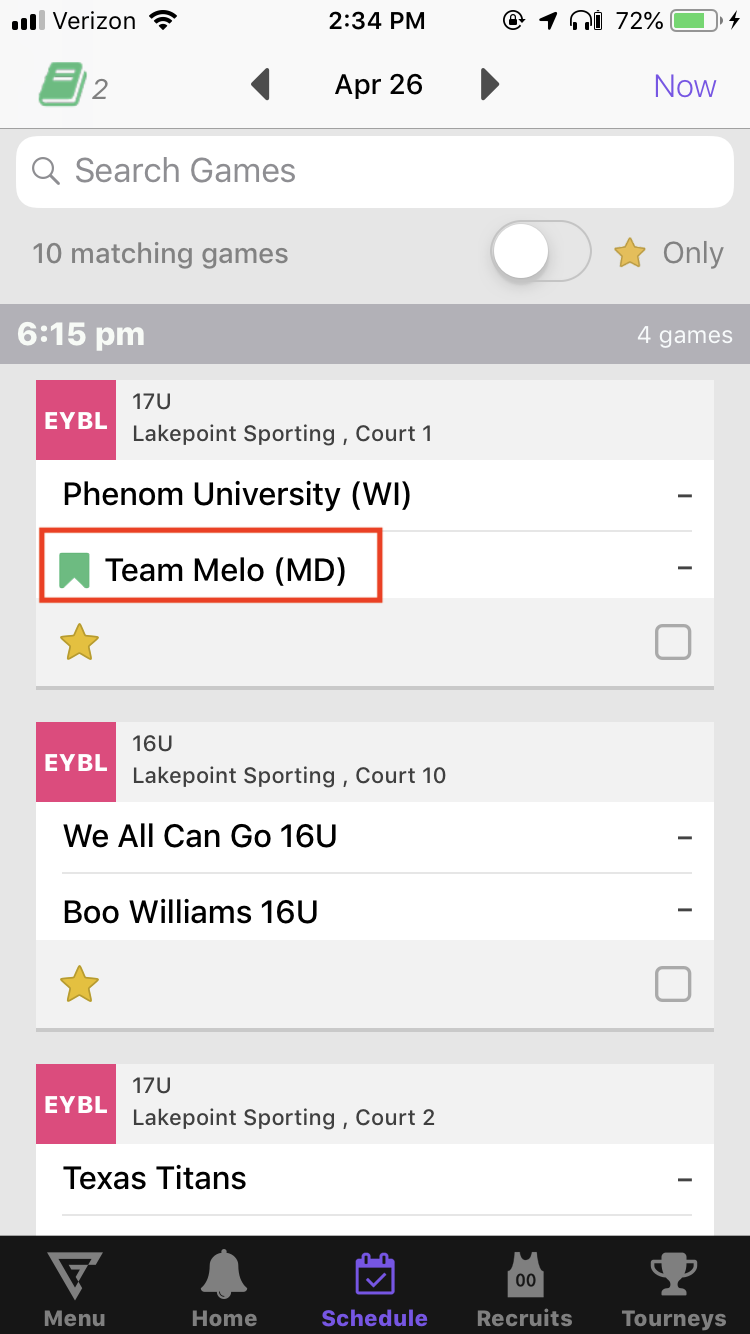 2. If you see a recruit's name below a team, this means the recruit has been added to the tournament and mapped to their tournament team. When these steps are completed, all games that recruit plays in will be added to your schedule. 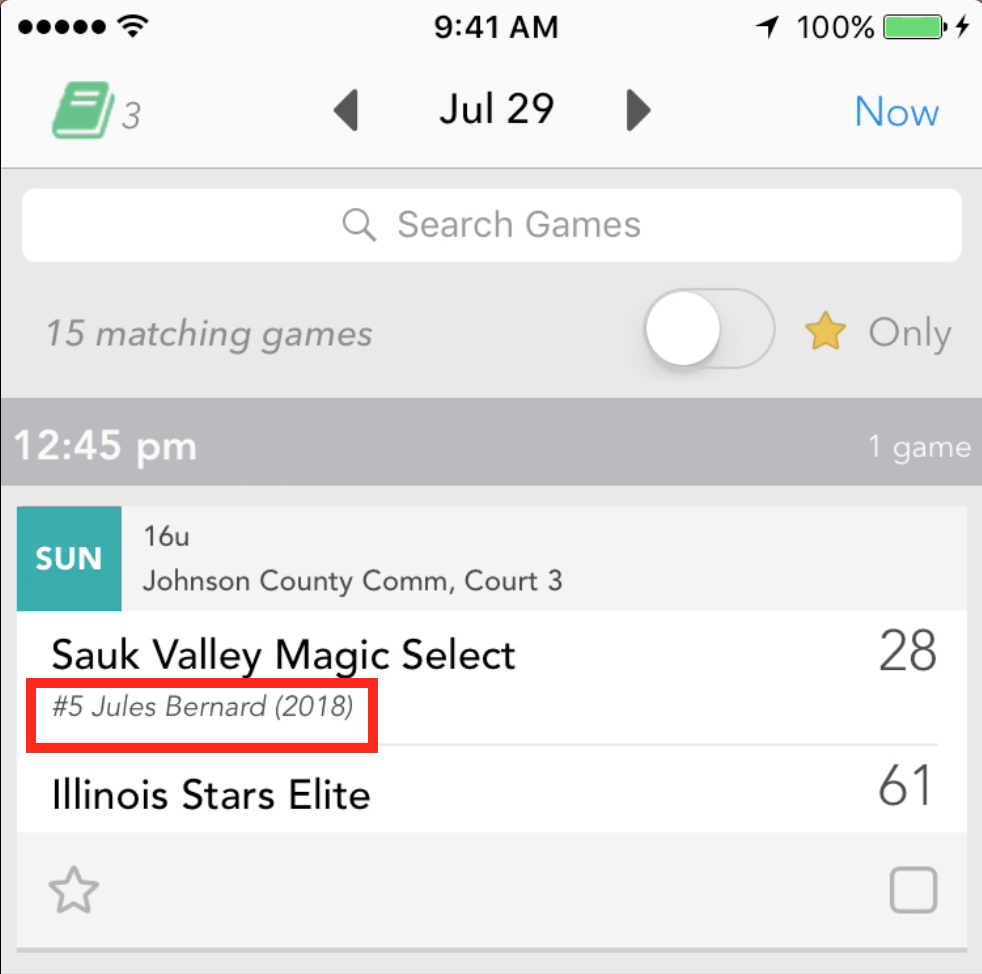 3. If you see neither a green flag or a recruit's name and just a highlighted star like below, this means you or another coach added the game to your schedule by starring the game. 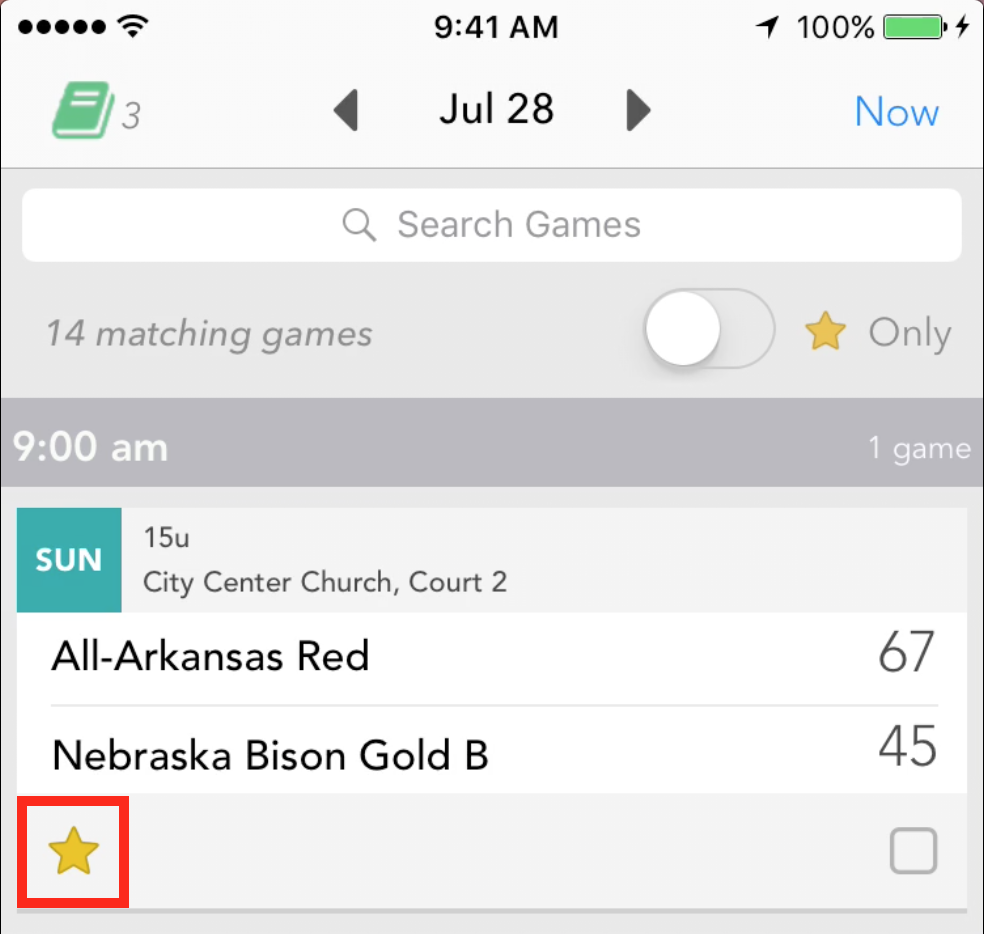 4. Each game on your schedule shows which tournament the game is a part of, the division, venue, and court number. Final scores will show here as well. 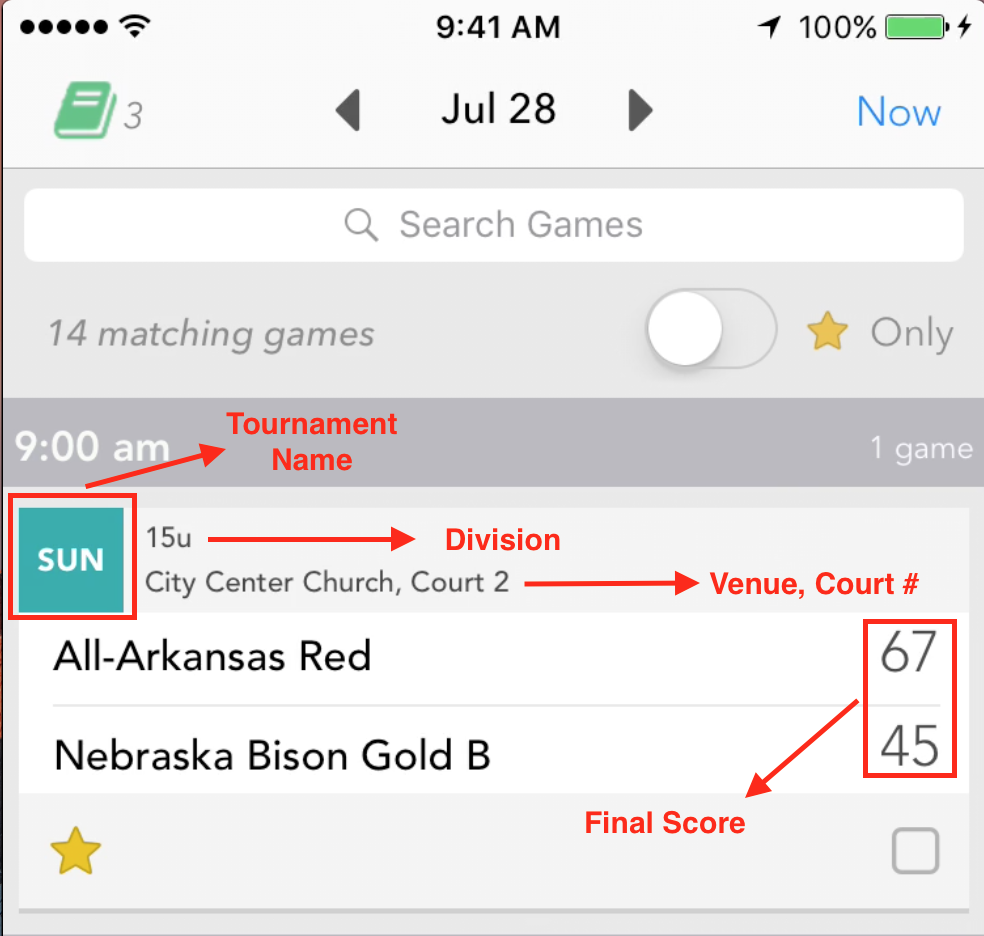 1. Starring a game on your schedule is equivalent to marking it as a high priority or must-see game. To star a game, tap on the star icon until it is illuminated. Tap the star icon again to 'un-star' a game. 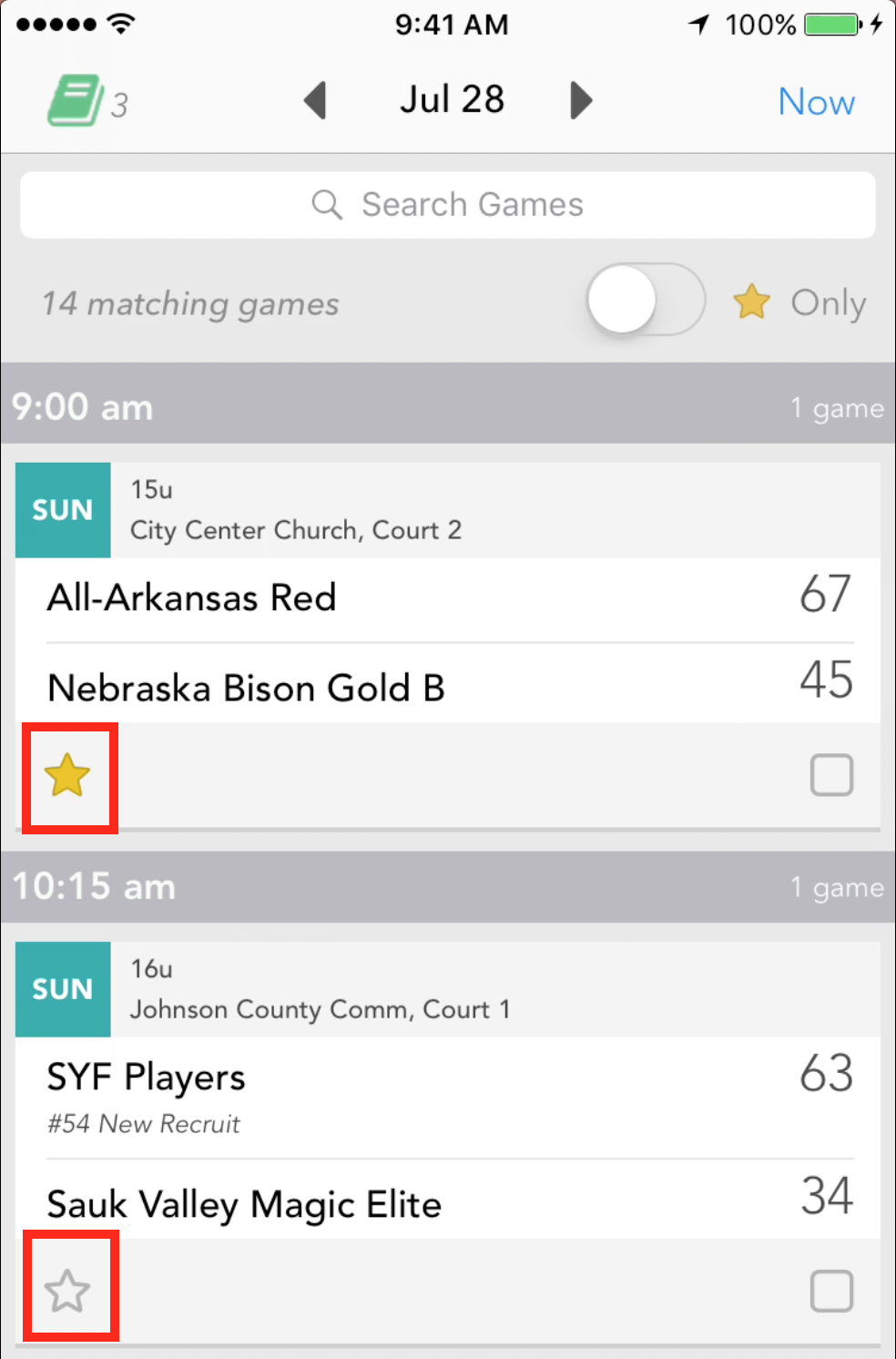 2. Toggle the Star Only switch at the top of your schedule to filter your schedule to show starred games only. This is best if you have a lot of games on your schedule for a given day, to help key in on the specific games you absolutely want to attend. 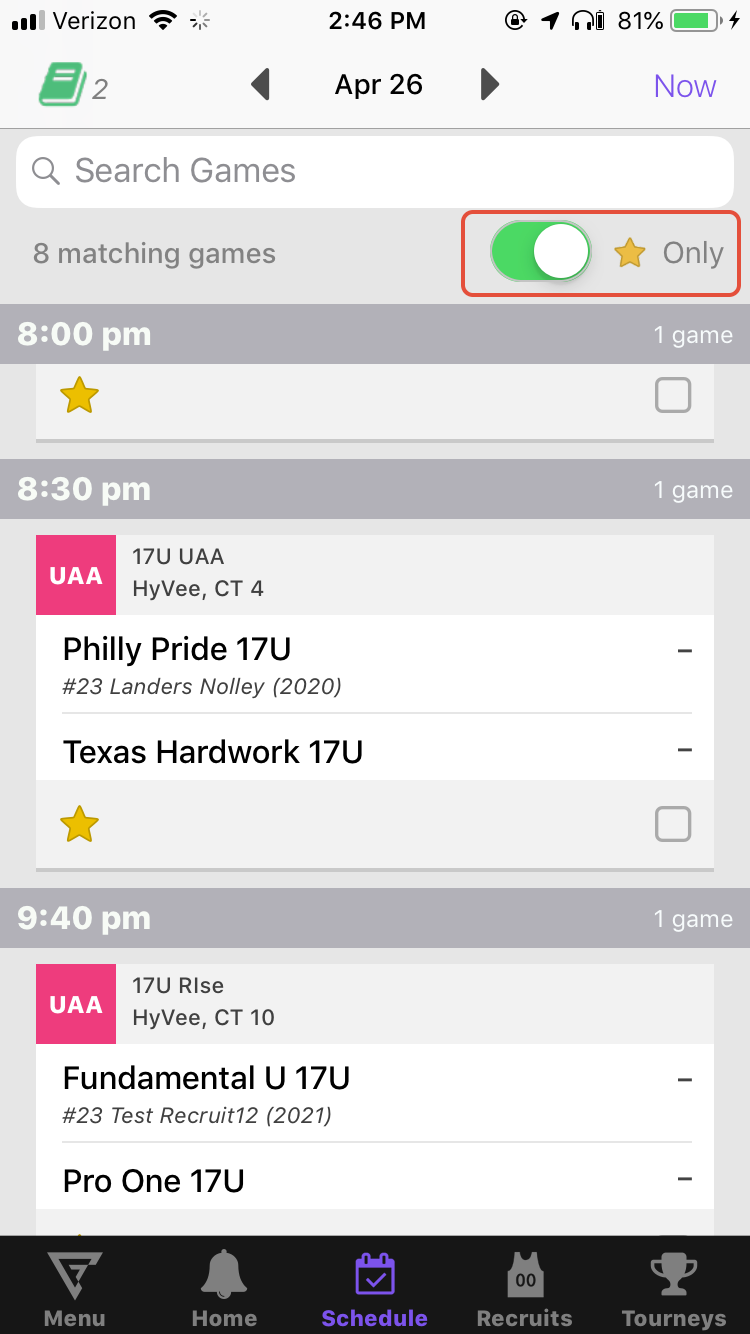 Game Details: After selecting a game from your Schedule tab, a screen will appear with details about the game including recruits assigned to either of the teams participating in the game. 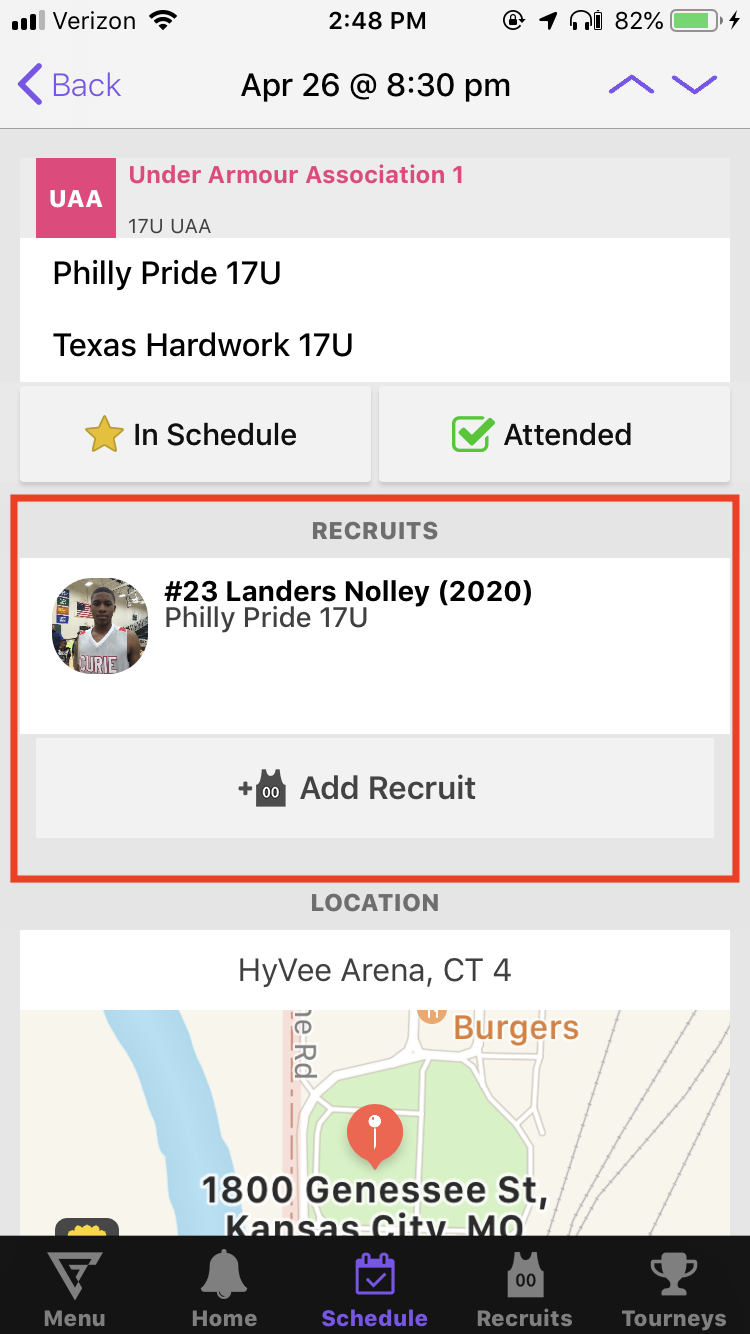 2. Tapping on the map will launch into Apple maps where you will receive driving directions from your current location. 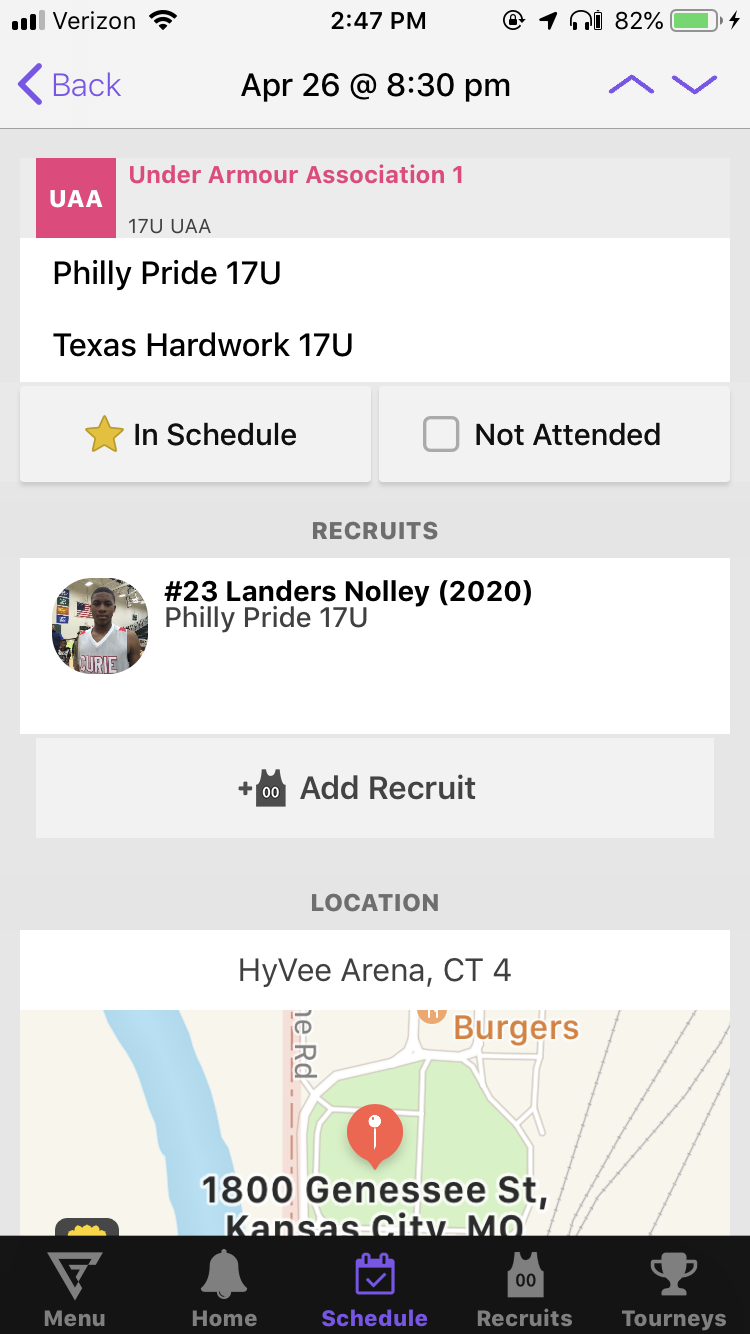 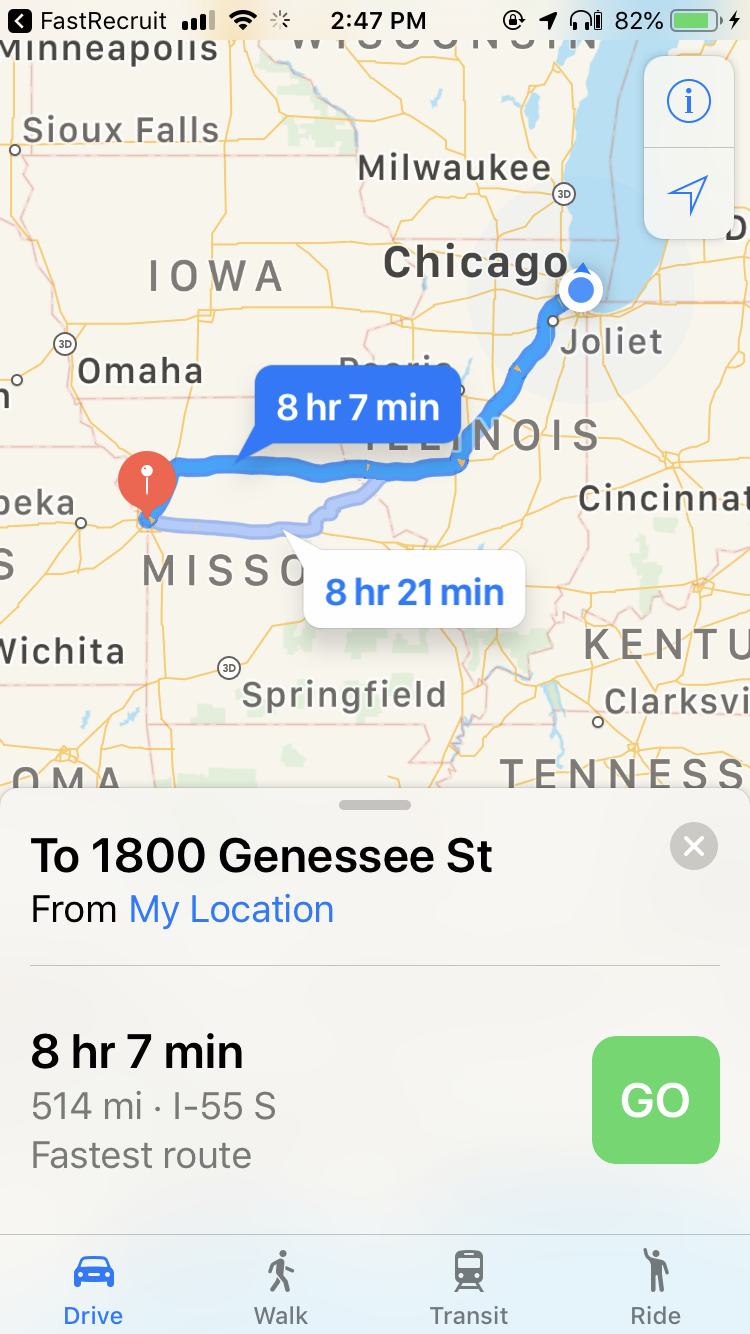 3. From the game details screen (as well as the schedule tab) you can click the green check-box to mark the game as attended. This feeds into our Game Attendance Report that can be run from the web-portal. 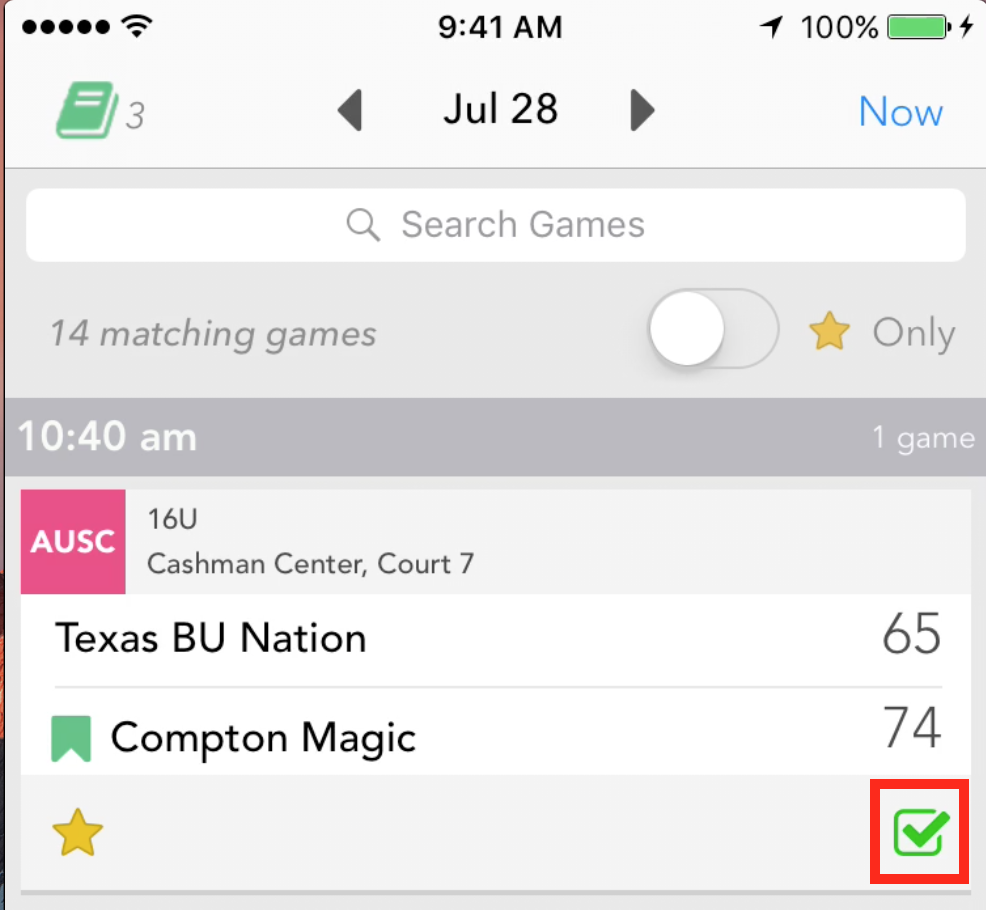 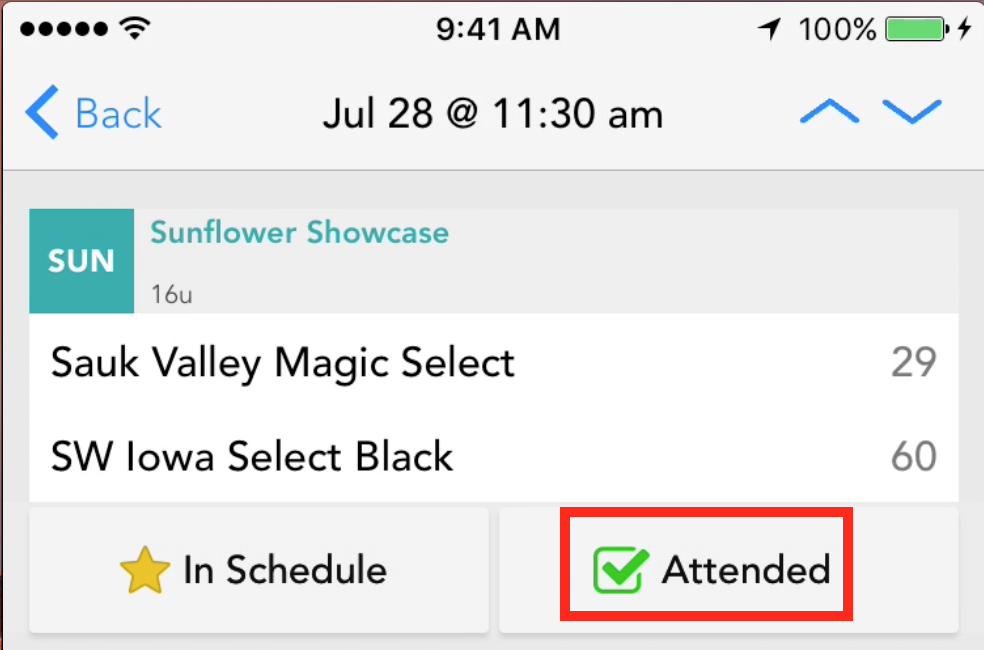 1. From the game details screen, you can add recruits to one of the two teams playing in the game. This is best used if you spot a recruit that was not on your radar before, or if you forgot to link one of your recruits to a tournament team.

2. After selecting a game, you'll see recruits listed who are mapped to either of the teams. You'll also see an option to Add Recruit. 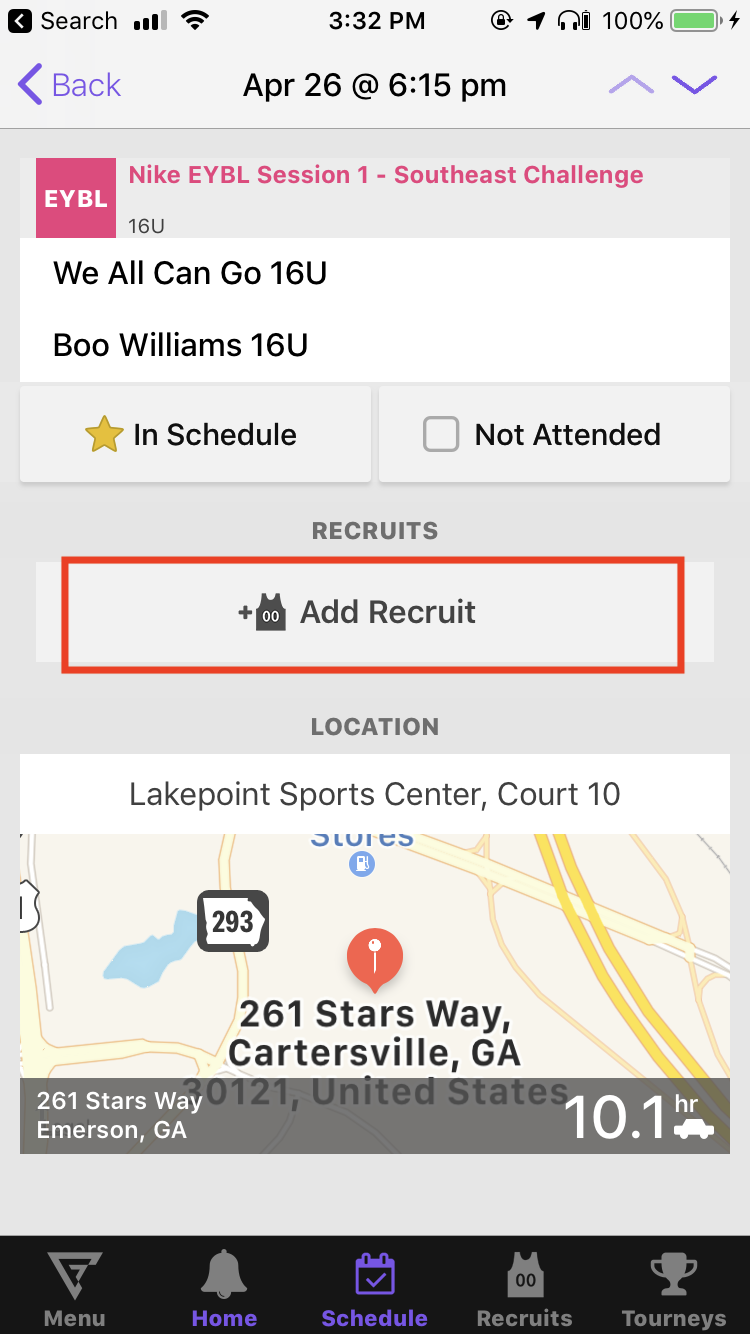 After selecting Add Recruit, your list of recruits will appear. Select a recruit to assign them to a tournament team. 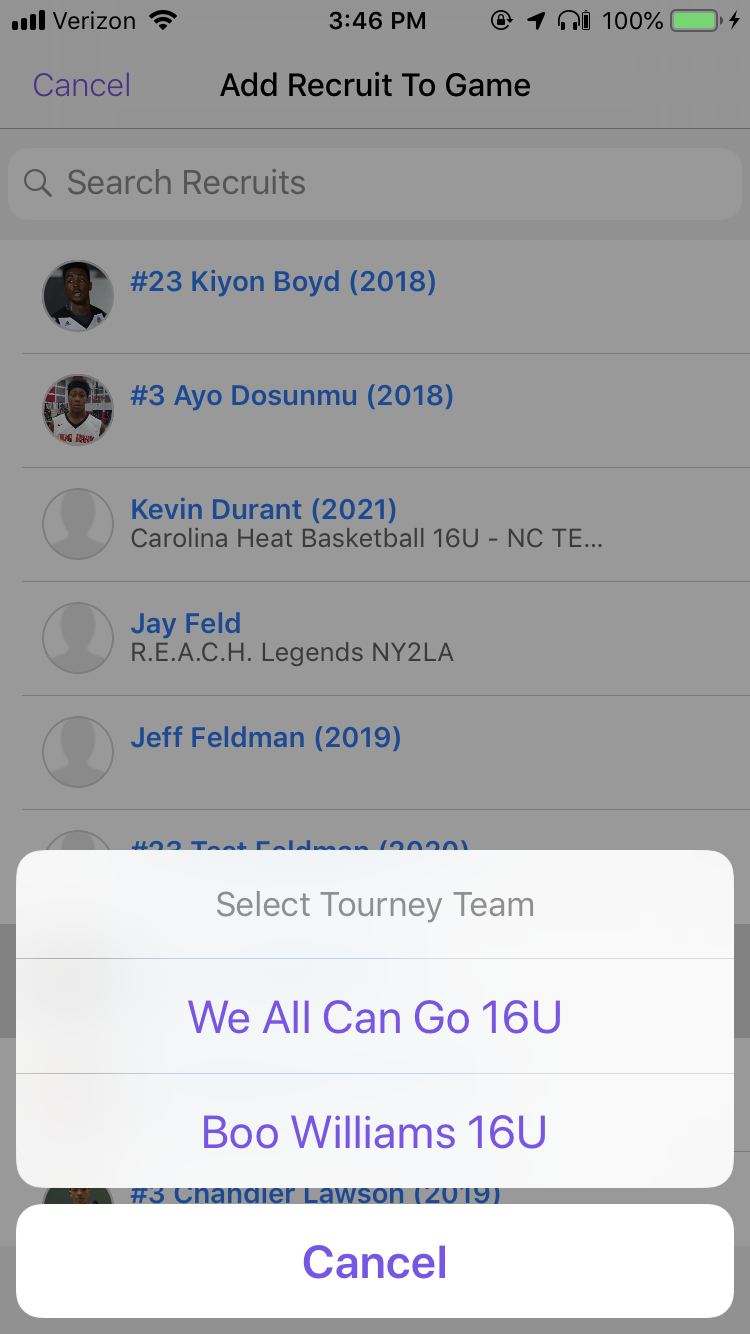 If the recruit you wish to add is not in your list, select Create New Recruit Record at the bottom. 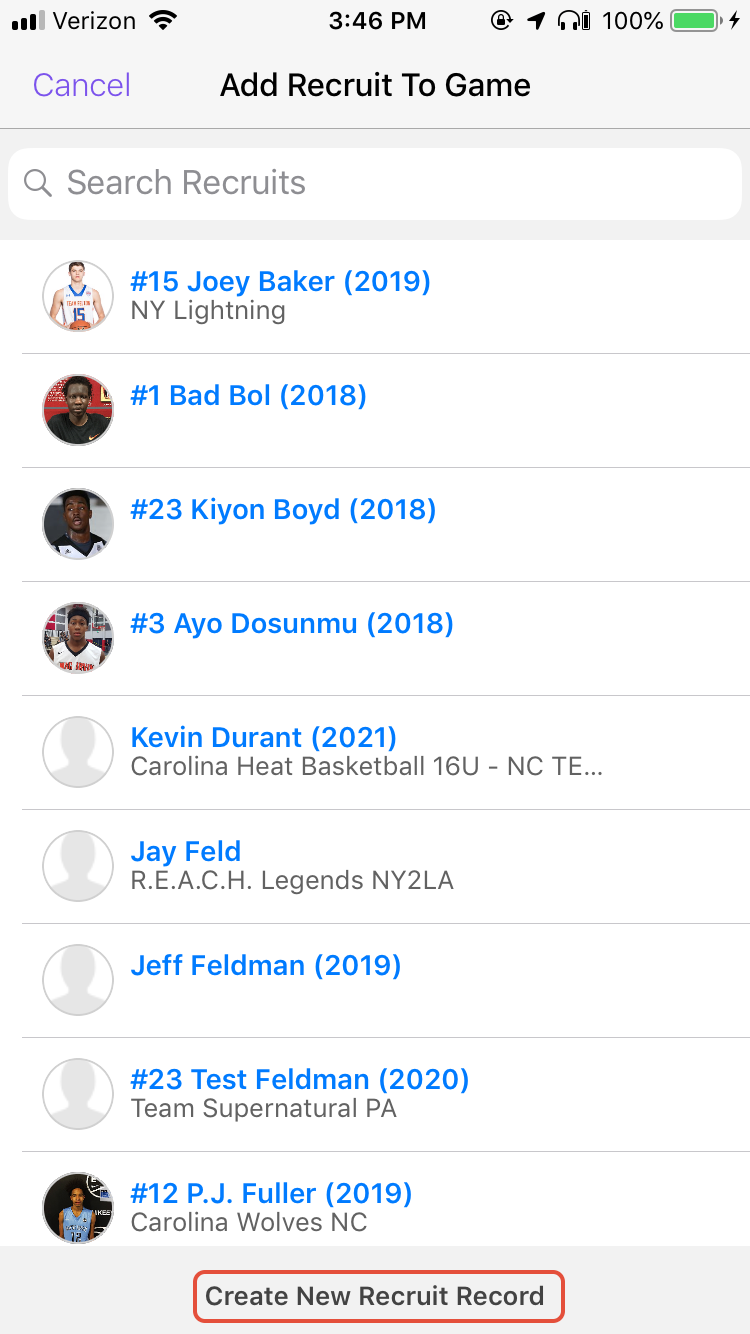 After selecting Create New Recruit Record, you will be prompted to select a team. Next, enter any information you know about the recruit at that time, even if it is just Club Jersey # and a Note. Notice that the Club Team and Tourney Team fields automatically filled in with the team selected. Click Save once complete to add the new recruit. 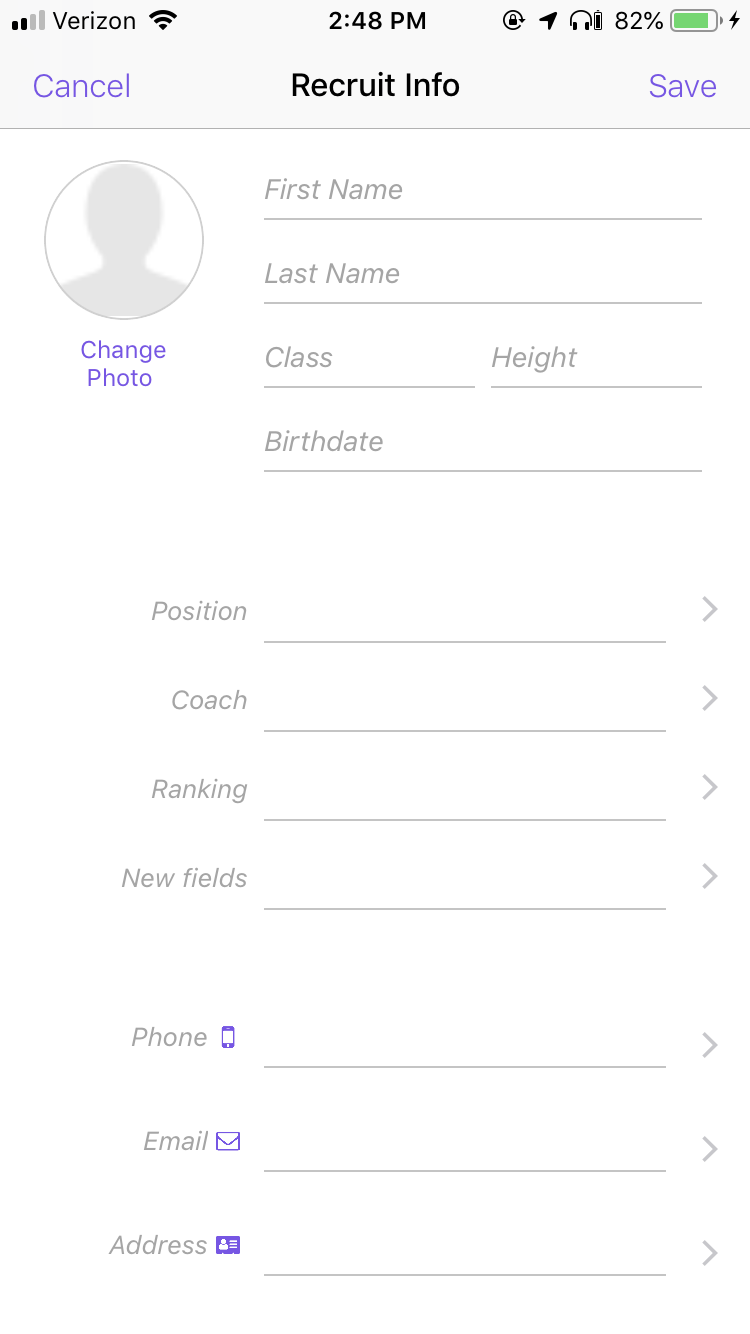